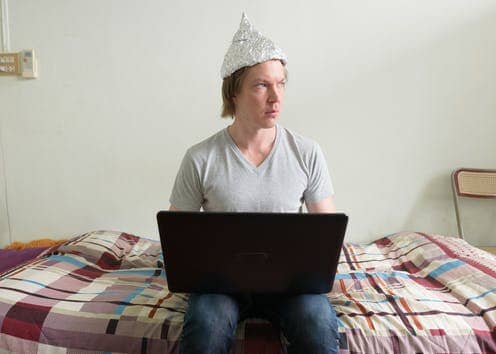 Running my own business, I learned pretty quickly that there’s no shortage of crazy people out there that think they’ve been the victim of hacking, when it was really a case of them not knowing how their computer worked, but one user in the Tinfoil Hat Club, as I refer to them, takes the cake.

A couple years back, this lady calls me because I had given her my card at a networking event. She claimed to be hearing voices in her house after her divorce, and that only I, an IT guy and cybersecurity expert, could remove them from her residence. Needless to say I declined to take her case, and rather bluntly told her that instead of a cybersecurity expert, perhaps she should seek a psychiatrist.

Another user was referred to me by a lawyer I did some work for in 2017. This user was filthy rich, and lived in a mansion easily worth somewhere in the 8-figure range. Plus, he probably spent more on bottled water in a week for himself and his staff, than I make in ten years. He claimed that someone was hacking into his Macbook and changing things around, running things in the background, the list goes on. I do my due diligence, and found absolutely no evidence of hacking. The closest thing I found was that his router still had the default password on it, so I changed it for him with his permission. He still insisted on being the victim of hacking, showing me printouts of screenshots he took of the background processes, and it was plainly obvious that he simply confused Daemon processes on his computers for evidence of hacking. It took me the better part of three hours to try and explain to him that he hasn’t been hacked, he likely needs computer classes to teach him how to use computers. Even as rich as he was, I don’t do computer tutoring, so I gave him several recommendations for computer tutoring businesses.

Yet another person who swore up & down they were the victim of hacking came from yet another lawyer, whom I’ve worked with frequently on cases. The lady in question swore her ex, who was a police officer with connections to several three-lettered gov’t agencies, was using said connections to break into her computer, delete files, and generally make her life miserable. Again, did my due diligence, and found no evidence of her being hacked, either on her computer, iPhone, or any other device she owned. I tried to explain this to her, when she levelled accusations that I was in league with her ex, and threatened to not pay me for the hours of work examining all her stuff. It wasn’t until the lawyer who referred her to me got involved that she relented and told her in no uncertain terms, that if I couldn’t find anything, she could rest assured that her ex, and his “friends” in the gov’t clearly had better things to do. A few months later, she called me again, this time insisting there was an invisible app on her phone, transcribing all her calls to everyone, then sending those transcripts to her ex, all because her ex suddenly knew about conversations she was having. I tried to tell her there’s no such thing as an invisible app that does what she was claiming, and that it could just as easily be a person she thought she could trust, going behind her back and spilling their guts to her ex. She again refused to believe her frends may still talk to her ex, and I haven’t heard from her since…

1 thought on “The voices…